Behavioural and data science since 2001

The Behaviour Change Agency is where powerful insights from behavioural and data science meet passionate creativity to stir up sustainable change in customers, employees and citizens.

The Hidden Brain Podcasts sheds light on our complex behaviour and what drives us in this ever changing world.  We highly recommend these podcasts that are evidence based, highly empathetic and entertaining.”
More
Current Projects
Behaviour
Science News

Trying to reason with climate change deniers or other types of sceptics is often considered the wrong strategy - but here is another side to the story. 97% of the world’s top climate scientists maintain the evidence-informed view that the Earth is warming due to human activity. Despite this, recent Ipsos polling found that 25% agreed that “Climate change exists but it is not caused by human activity” and 7% agreed with the statement “There is no climate change”. 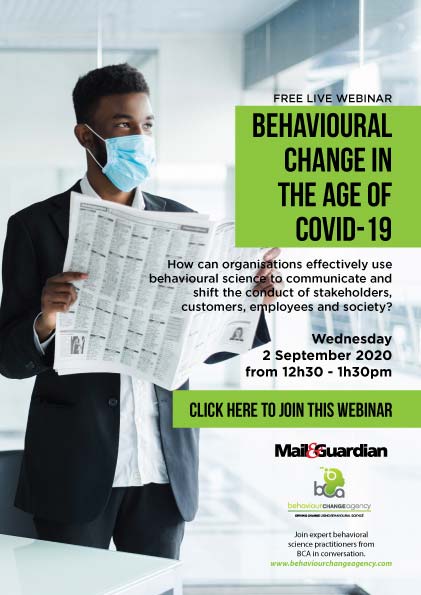 "BCA understood our aims and objectives from the outset and has developed a smart, creative solution based on thorough research and the latest insights from behavioural science. The result is a custom-built digital portal relevant to the local South African context and designed to accommodate the very specific needs and motivations of the distinct stakeholders in this area." 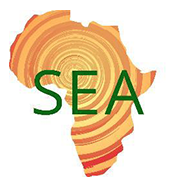 Megan Euston-Brown, Director
“Their in-depth understanding of our target segments, as well as their knowledge of using behavioural science to build online movements, resulted in a strategy that was unique, innovative and highly impactful. In addition, their impressive commitment to evidence-based solutions, testing and thorough reporting mechanisms, successfully delivered on our mandate.” 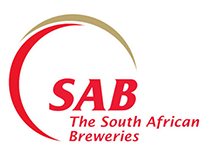 Ms Zoleka Lisa, VP: Corporate Affairs
“We have found BCA to be an agency with a proven track record of developing digital campaigns and solutions that actually deliver meaningful results in shifting behaviour within complex and multi-dimensional areas, hence drawing them in again in an area such as mental health.”

Dr Lungi Nyathi, Managing Executive
“BCA has been instrumental in using behavioural communications to raise our digital profile in order to inform the public and key stakeholders about our activities, as well as mobilise access to educational opportunities for the youth of Mitchell's Plain and surrounds. As a public benefit organisation, it was critically important for us to partner with an agency capable of delivering expert guidance and excellent quality within exacting budgets.”

Trevor Manuel, Founding Patron
“The team’s behavioural science approach to digital marketing and communications, coupled with its creativity, attention to detail and insight into the industry, deliver campaigns that are relevant, effective and implemented on budget and on deadline – as well as results that are measurable. From brand design and video to digital communications and print campaigns, projects are always approached with enthusiasm, care and focus.” 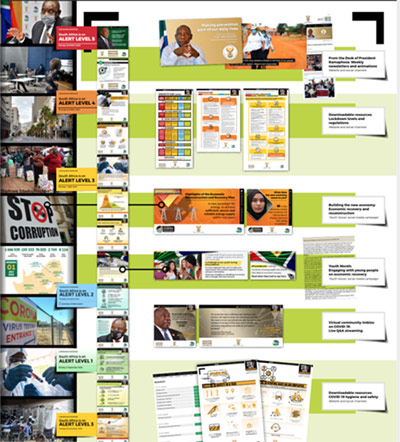 In 2020 BCA was brought on board to implement a clear and effective multimedia campaign to raise the profile of the State of the Nation Address (SONA) and communicate its content and objectives on a broad scale. Our behaviourally informed approach ensured important Presidency messaging reached the SouthAfrican public on multiple digital platforms.

During the challenging first months of the coronavirus pandemic (March 2020 - October 2020), this resource also became a critical distribution point for COVID-19 information, helping to publicise and amplify vital announcements from President Cyril Ramaphosa. Through simple and salient digital assets and graphics distributed on a variety of government and social channels, BCA was able to reach and engage millions of South Africans and drive life-saving behaviour change.
View PDF (2.2mb)

THE PRESIDENCY - Phased easing of the lockdown

Why is falling for fake news so easy despite all the warnings? Why do we carry high-interest debt even when we have the means to pay it off? Why are there so many browser tabs open on your screen right now even though digital clutter is so stressful?
‍
At BCA, we mine insights from behavioural research to illuminate what really motivates human actions. Then, we add rigorous data analysis and a range of creative strategies to develop behavioural and communication solutions that improve decision-making and create better outcomes for customers, employees and citizens.

What is behaviour change?

Trying to reason with climate change deniers or other types of sceptics is often considered the wrong strategy - but here is another side to the story. 97% of the world’s top climate scientists maintain the evidence-informed view that the Earth is warming due to human activity. Despite this, recent Ipsos polling found that 25% agreed that “Climate change exists but it is not caused by human activity” and 7% agreed with the statement “There is no climate change”.

One of the positive experiences during two years of pandemic gloom has been the speed of scientific progress in understanding and treating Covid. Many effective vaccines were launched in less than a year and rapid large-scale trials found a cheap and effective drug, dexamethasone, that saved thousands of lives. The global scientific community has also carried out “genomic surveillance” – sequencing the genome of the virus to track how it evolves and spreads at an unprecedented level: the public genome database has more than 5.5m genomes. The great value of that genomic surveillance, underpinned by a commitment to rapid and open sharing of the data by all countries in near-real time, has been seen in the last few days as we’ve learned of the Covid variant called Omicron.

Will the Metaverse Impact Mental Health?

Publicity has been given to the planned creation of a ‘metaverse’ by Facebook. A ‘metaverse’ is a term given to the evolution of the internet into a virtual world in which people interact through digital selves or avatars. According to Facebook: “In the coming years ... people will transition from seeing us primarily as a social media company to seeing us as a metaverse company … In many ways the metaverse is the ultimate expression of social technology.”1 The motivation behind this development is somewhat unclear, and the public justifications given by the company to date are scientifically incoherent or improbable. However, there is research evidence that helps us understand the likely outcomes of a metaverse for mental health.